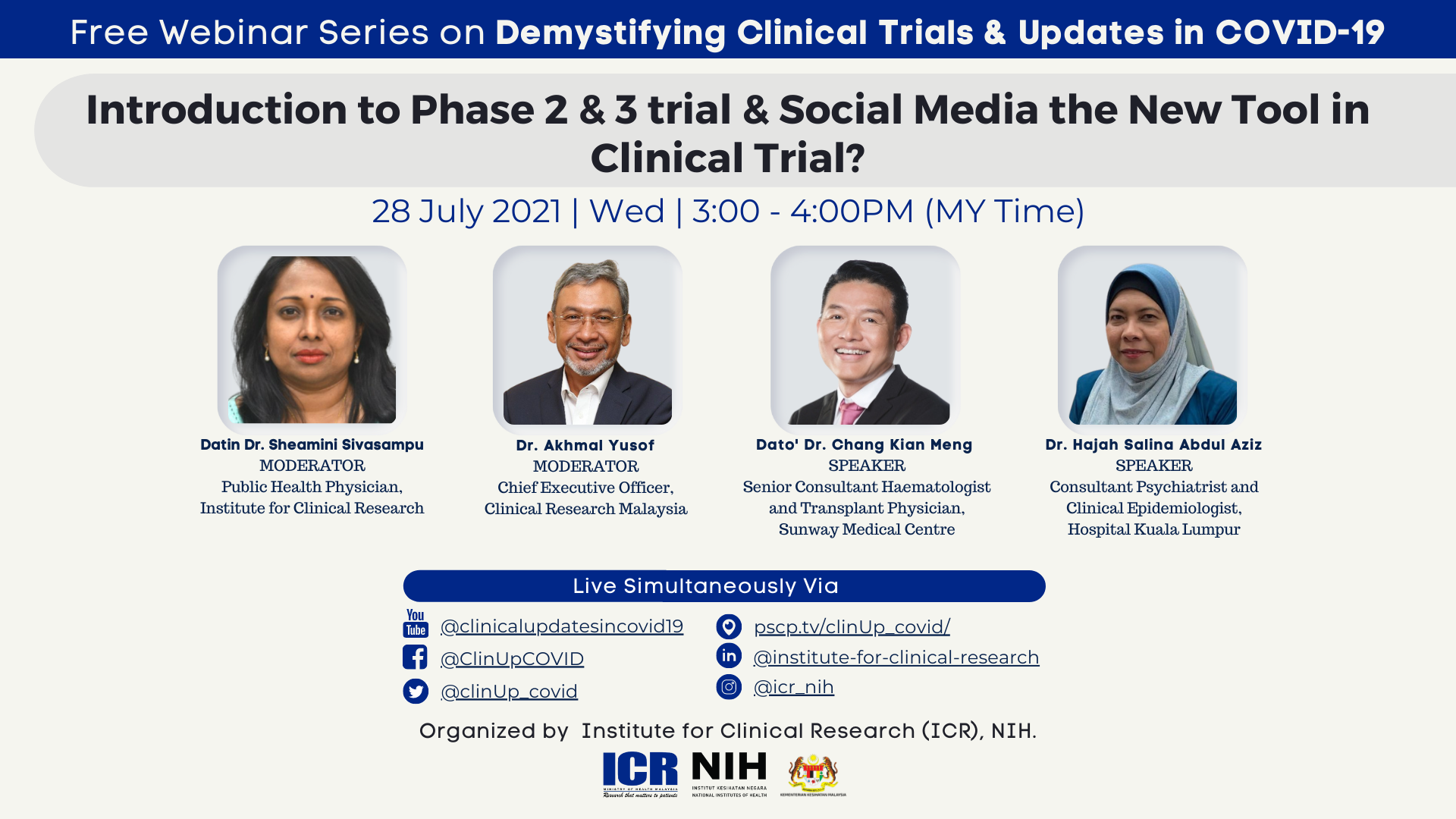 This is the final webinar in the new season of Webinar Series on Demystifying Clinical Trials & Updates in COVID-19. No need to register. It's free. Join us live on 28 July 2021 at 3 PM (GMT+8). You can type your questions below.

Q&A: Do you have questions to ask?

Datin Dr. Sheamini Sivasampu is a Public Health Physician and has a wide span of experience, ranging from conducting and translating research that culminate into policymaking. She has served in various departments of the Ministry of Health Malaysia (MOH) including Medical Practice Division (2001-2002), Medical Development Division (2002 till 2009) and is at present attached with the Institute for Research Centre (previously known as the Clinical Research Centre), National Institutes of Health.

She has been the Head of the Centre for Clinical Outcome Research (CCORe) (previously known as Healthcare Statistics Unit) since 2009. Her area of research interest is in healthcare surveys and healthcare system. She has to-date coordinated five national healthcare statistics surveys. These surveys could be considered as the most important data collection efforts in Malaysia, involving both hospital and primary care providers. The outcome of the survey conducted by have benefitted many and is being sought by local and international bodies alike. She has recently embarked in research involving clinical outcomes, especially in cardiovascular disease.

She was a visiting Scientist in Health System Group Program in the Department of Global Health and Population at the Harvard TH Chan School of Public Health from November 2016 till November 2017.

She has numerous peer reviewed publications through national and international research. To date she has published 22 manuscripts in areas of health systems, primary care and cardiovascular disease with a H index of 7 based on Google Scholar and more than 190 citations.

Dr. Akhmal Yusof graduated from the Royal College of Surgeons in Ireland in 1992 and practiced medicine in the public and private hospital for almost 10 years. He later worked with the American International Assurance one of the biggest medical insurance provider in Malaysia as Medical Manager. Later in he was head hunted to lead the Medical Department in AstraZeneca, a global research-based biopharmaceutical for over 13 years. His main forte in the pharmaceutical industry are clinical research management & regulatory, medical and government affairs. He now leads Clinical Research Malaysia (CRM) as their Chief Executive Officer since 2015. CRM is a Malaysia Ministry of Health owned-company established in 2012 to promote Sponsored Research to come to Malaysia.

Panellists for this week:

To make life easy, no need to register. Just tune in on the designated date and time.

How to join the webinar?

There are 8 ways to watch the webinar live every Wednesday at 3:00 PM (GMT+8). You can join us live using your preferred social media account or one of the options below. Don't forget to use app.sli.do to ask questions. As usual, our event code is #hcsmMY

P/S: If you are going to watch the webinar using mobile phone or tablet, it will be better to join via:

As we put the live video, live Q&A and chat on the website for easier viewing and participation.

How to get CPD points?

The certificate of attendance is issued to those who participated live (in real-time). We do not give a certificate to those watching the replay/recorded video/podcast.

Looking forward to seeing you live!

If you need more information about this season: the weekly CME programme, CPD point and other info, please go to this webpage: https://clinupcovid.mailerpage.com/resources/r0x8r9-webinar-series-on-demystifying-cl

This is a weekly live webinar is organized by Institute for Clinical Research (ICR), NIH Malaysia.